Developed in 2019 in South Korea by Smillegate and published by Amazon Game Studio, Lost ark is a free to play action MMORPG that has been gaining more and more space in global territory. The game arrived in the South Korean region in late 2019 and in February 2022 it was finally released in Latin America and Europe.

The official announcement with the release date in Latin America, North America, Europe and Oceania was released during a TGA 2021 presentation where Amazon Games and Smilegate RPG confirmed the date for February 11, 2022 and early access with the purchase of Founder’s Pack starting February 8.

The story revolves around the world of Arkesia, a realm where fantasy and mystery are prevalent. Playable individually or with friends, Lost Ark currently features 15 classes: Artillerist, Berserker, Sorceress, Paladin, Gunlancer, Striker, Wardancer, Scrapper, Soulfist, Gunslinger, Deadeye, Sharpshooter, Bard, Shadowhunter or Deathblade, and the choice is key to defining your fighting style during battle.

Lost Ark arrived recently and the numbers that the game has been presenting are amazing. According to Steam DB, on February 12, Lost Ark recorded a peak of 1,325,305 simultaneous players on Steam, with this, Lost ark becomes the second game with the highest peak of simultaneous players, behind “PUBG: Battlegrounds” which recorded the mark of 3,257,248 in January 2018 and in front of Dota 2 which has already recorded 1.29 million simultaneous players.

Available only for PC, the MMORPG suffered a delay of hours announced minutes before launch, on Friday (11) the official twitter account of Lost Ark made an official statement informing the occurrence: 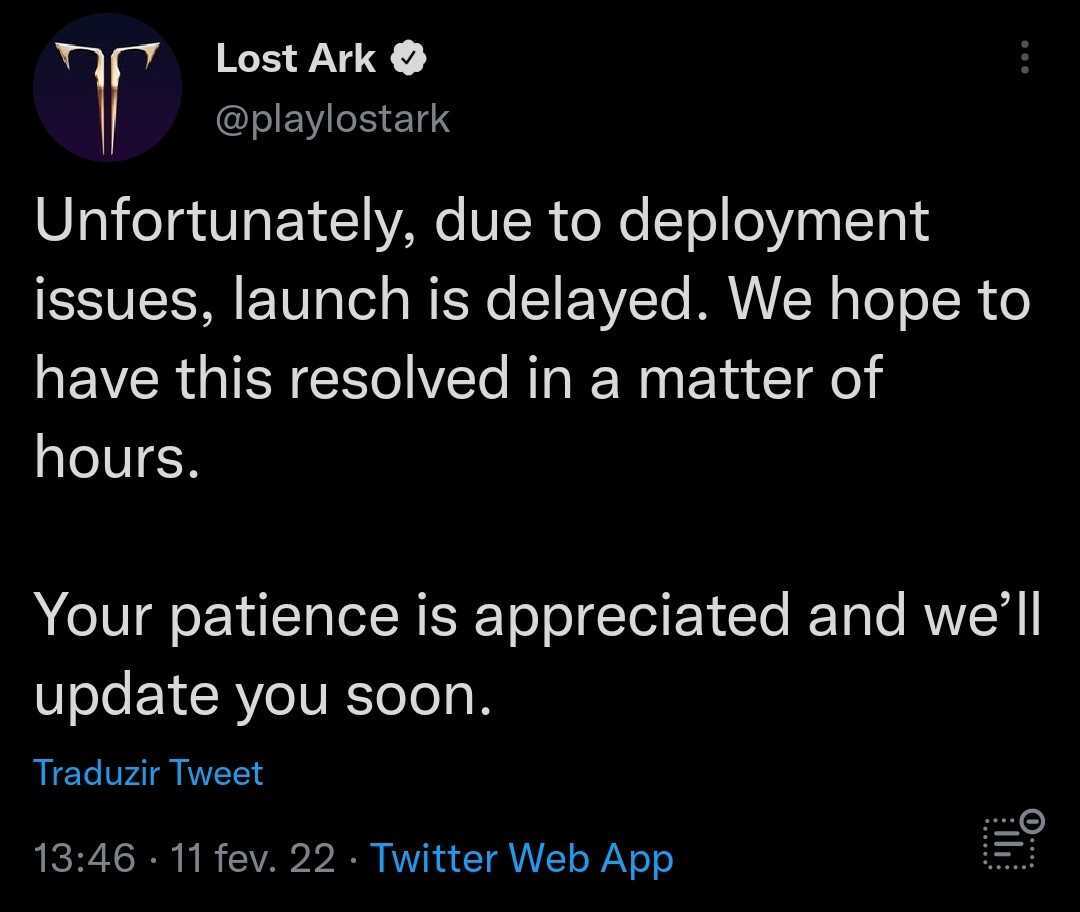 Even before its official launch, 530,000 players got the first-hand experience thanks to the Founder’s Pack and with this record we could already predict a high number of players and consequently crowded servers and queuing to log in. With that, the company issued a statement during Sunday night (13) about the new European region update: 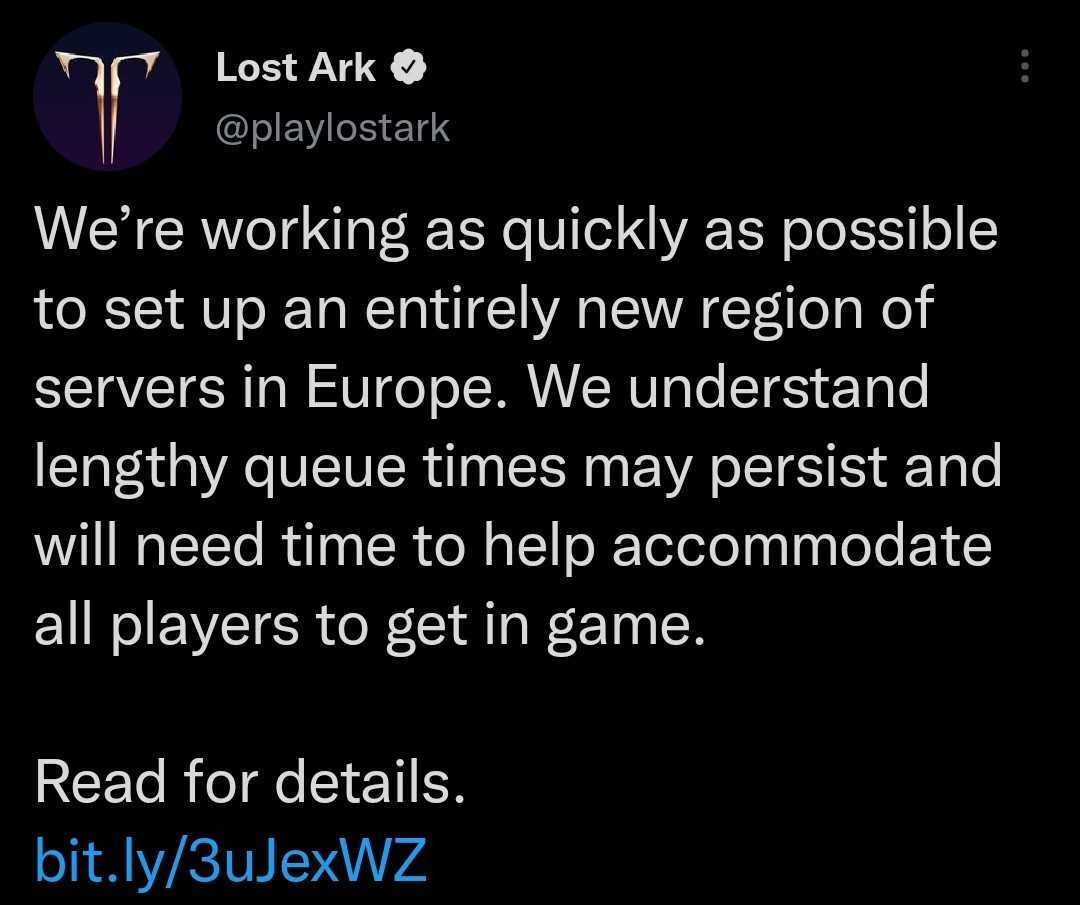 It’s common for big releases to arrive hyped, the likelihood of crowded servers and instability during the first few hours of gameplay is high and that’s why a VPN can help you.during and after launch! NoPing has over 1500 servers, support for over 1000 games and the BOOST FPS function that increases your fps during the game. Don’t waste time and try it right now for 7 days for free.

With 700,000 concurrent players and officially declared the most played game of 2021 on Steam, New World is breaking all barriers and surprising audiences who have waited so long for Amazon Games’ MMO.

Within 24 hours of its official launch, New World has broken the record previously held by Valheim, which recorded 502,000 concurrent players in February 2021 on Steam. In addition to the new record broken, New World also broke the Twitch TV platform where it reached over 970,000 simultaneous viewers.

The success was expected by both the distributor and the fans who have been waiting for the game for more than a year and that during development was postponed 3 times in search of improvements in gameplay, thus making the anxiety for the final result get bigger and bigger. In addition, expectations were created from the success that the closed beta did on July 20, surpassing 200,000 players on Steam.

With the popularity up there, New World presented failures in connectivity and queues with players waiting for a server, the official account of the game has spoken giving the welcome to players and informing to be aware in relation to the problem presented, check out: 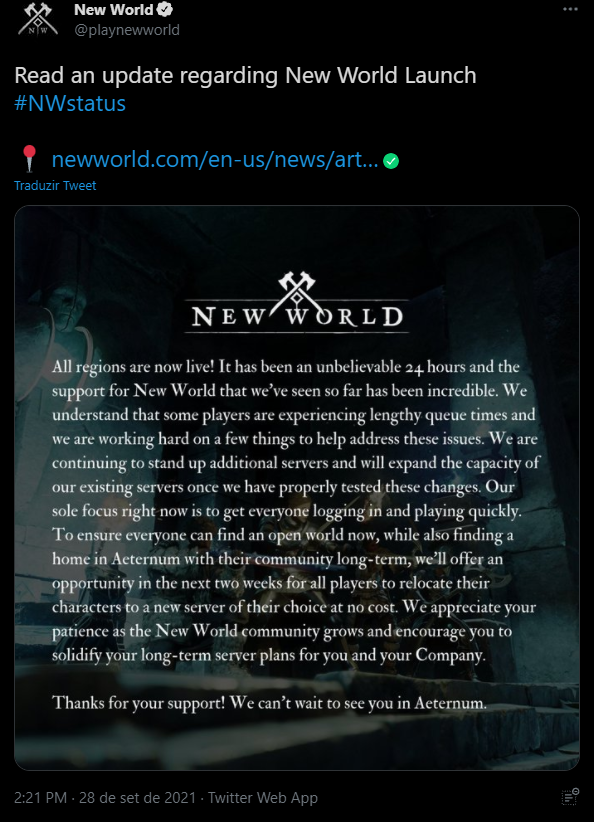 All regions are now live! It has been an unbelievable 24 hours and the support for New World that we’ve seen so far has been incredible. We understand that some players are experiencing lengthy queue times and we are working hard on a few things to help address these issues. We are continuing to stand up additional servers and will expand the capacity of our existing servers once we have properly tested these changes.

Our sole focus right now is to get everyone logging in and playing quickly. To ensure everyone can find an open world now, while also finding a home in Aeternum with their community long-term, we’ll offer an opportunity in the next two weeks for all players to relocate their characters to a new server of their choice at no cost. We appreciate your patience as the New World community grows and encourage you to solidify your long-term server plans for you and your Company.

This way, NoPing has separated for you a tutorial on how to install the newest MMORPG that is conquering players all over the world! Check out the step by step

1- Log in to NoPing’s homepage and register to enjoy it for 7 days for free.

2- With the game already installed and open on your machine, open the NoPing platform and select the game New World, after that, select the option “choose server”. 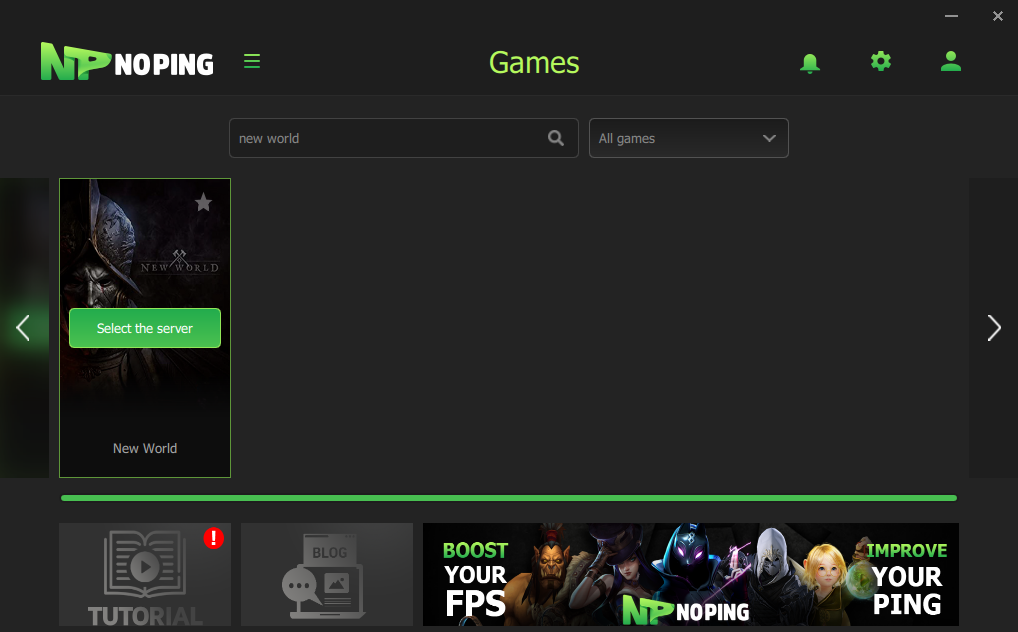 3- With the new screen open, click on the button next to “PING” to generate the best ms results on each server. 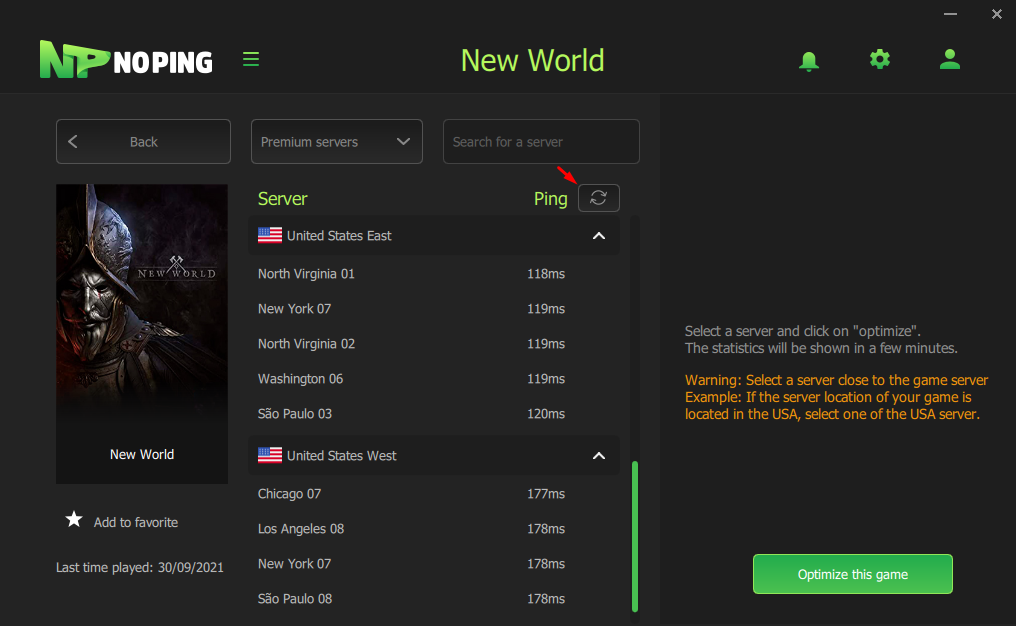 4- Select the server with the lowest ms and click “Optimize this game”. 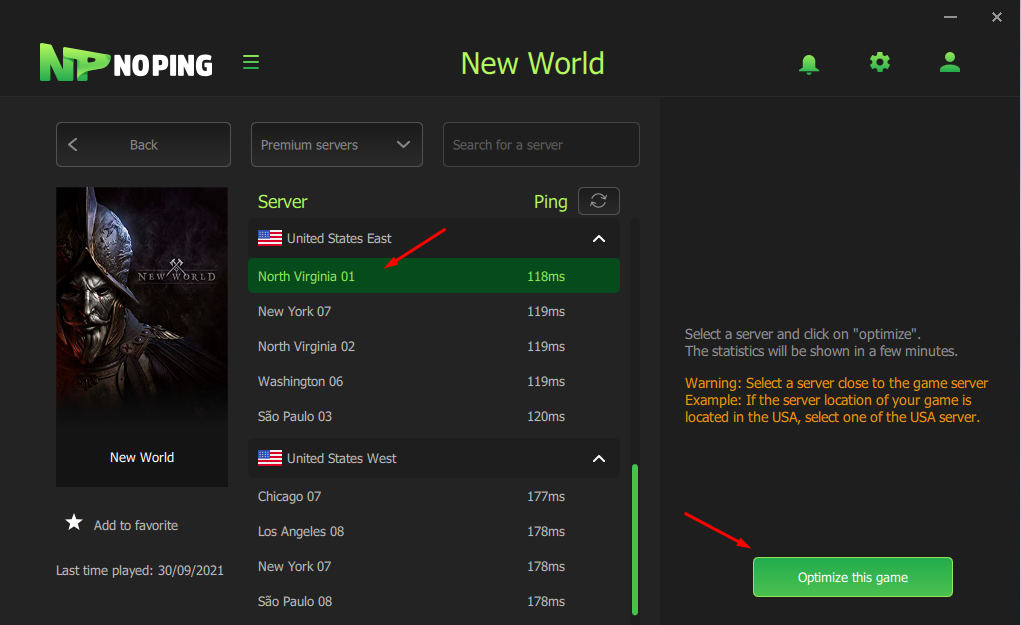 5- The selected server receives a flag beside and automatically appears the button “Disconnect”, after making the connection in the game back to the screen of NoPing and note that automatically will appear in the right corner of the statistics the name of the game and its ping. 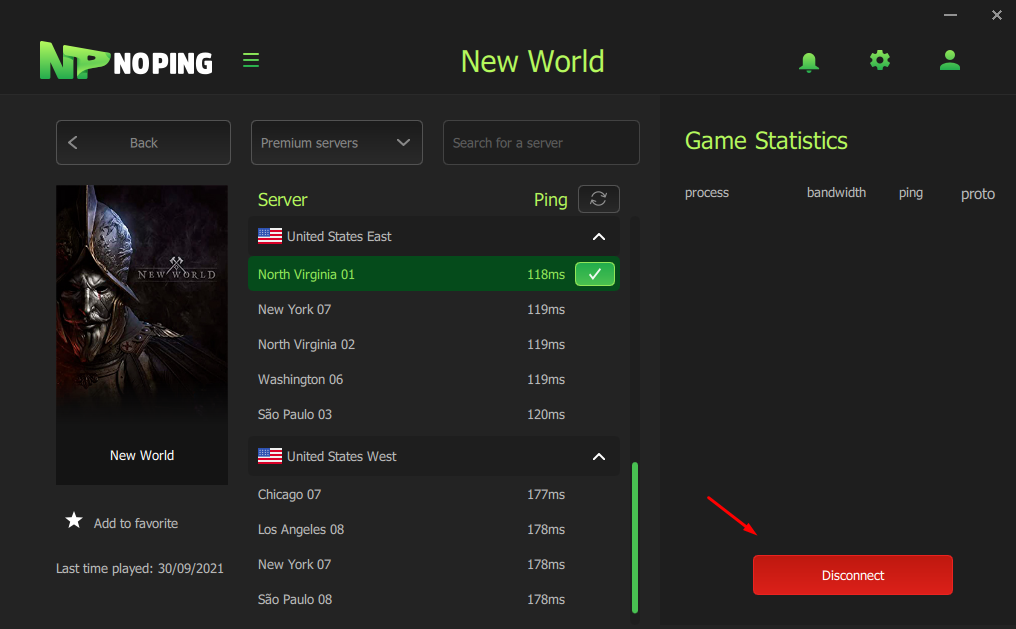 6- If you experience instability in the game, click on “Premium Servers” and select “Others Servers”. 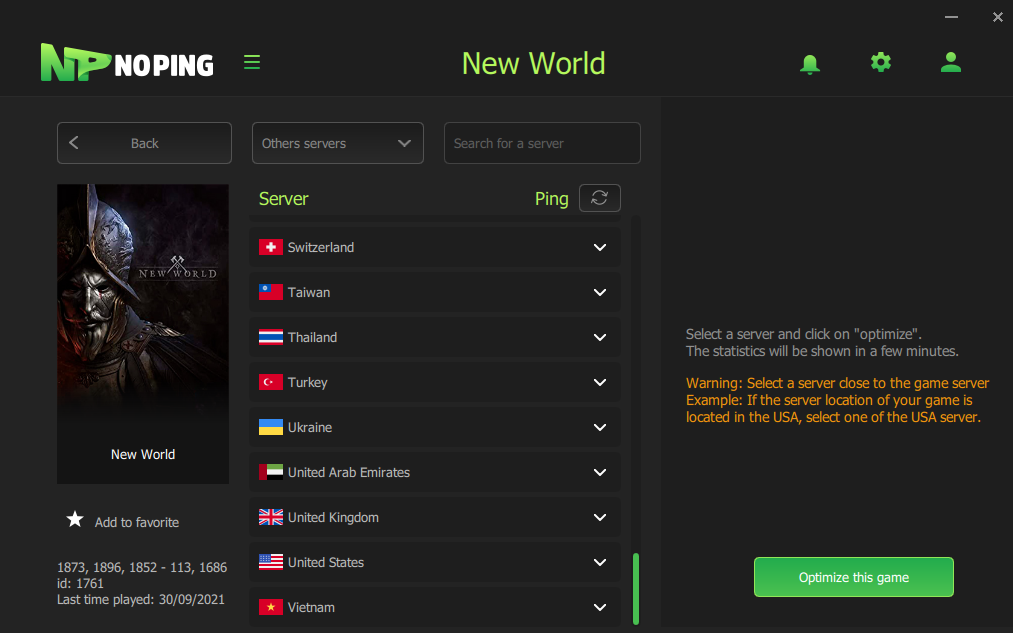 7- To further optimize, select the gear in the upper right corner. 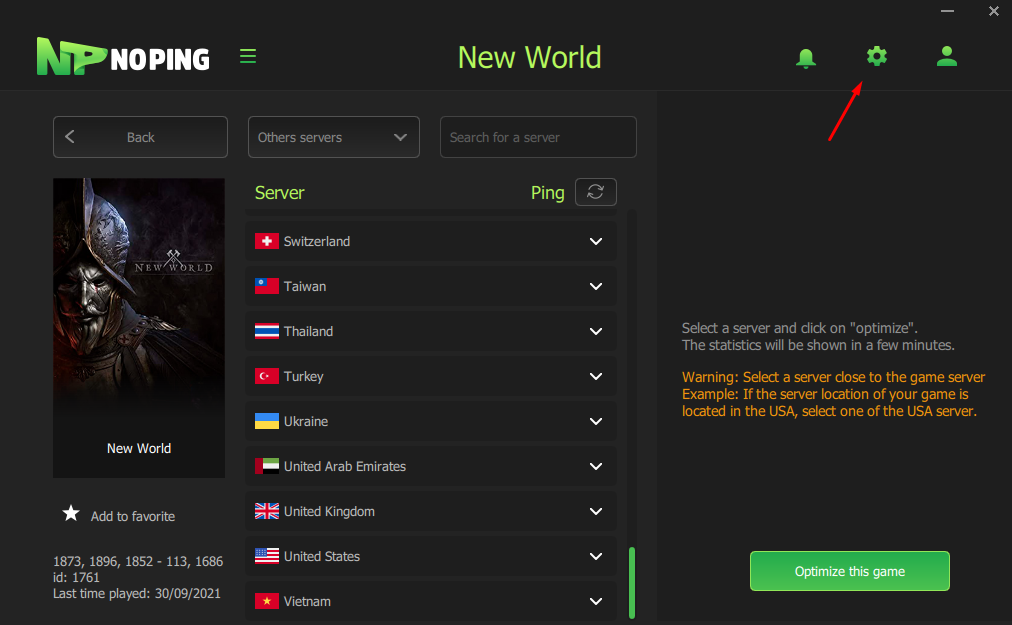 8- A new settings screen will appear, on this screen you can enable and disable optimization tools to improve your game. 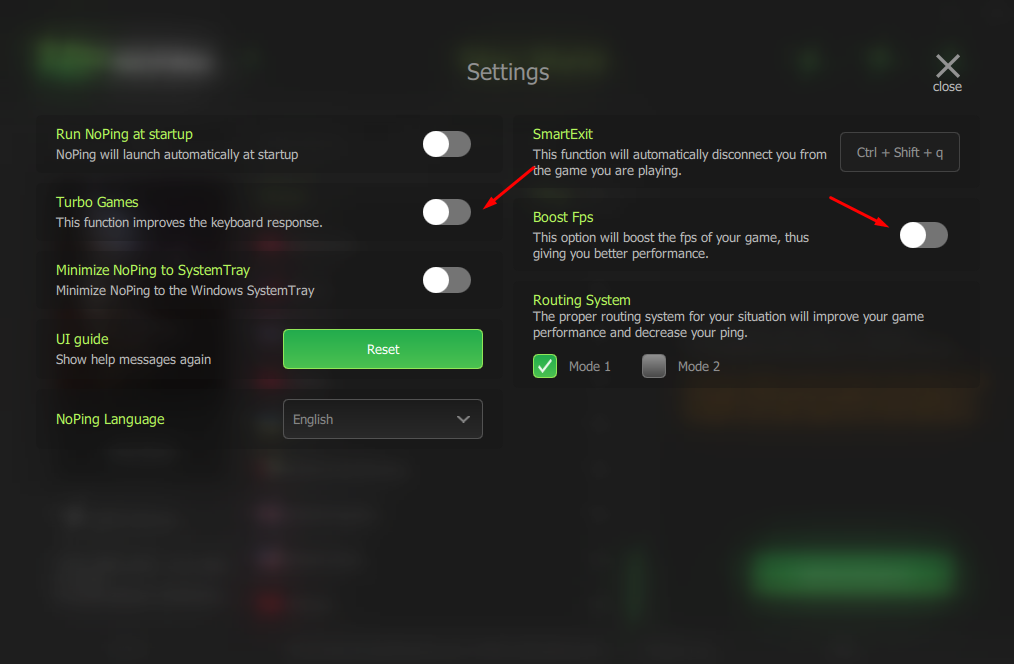 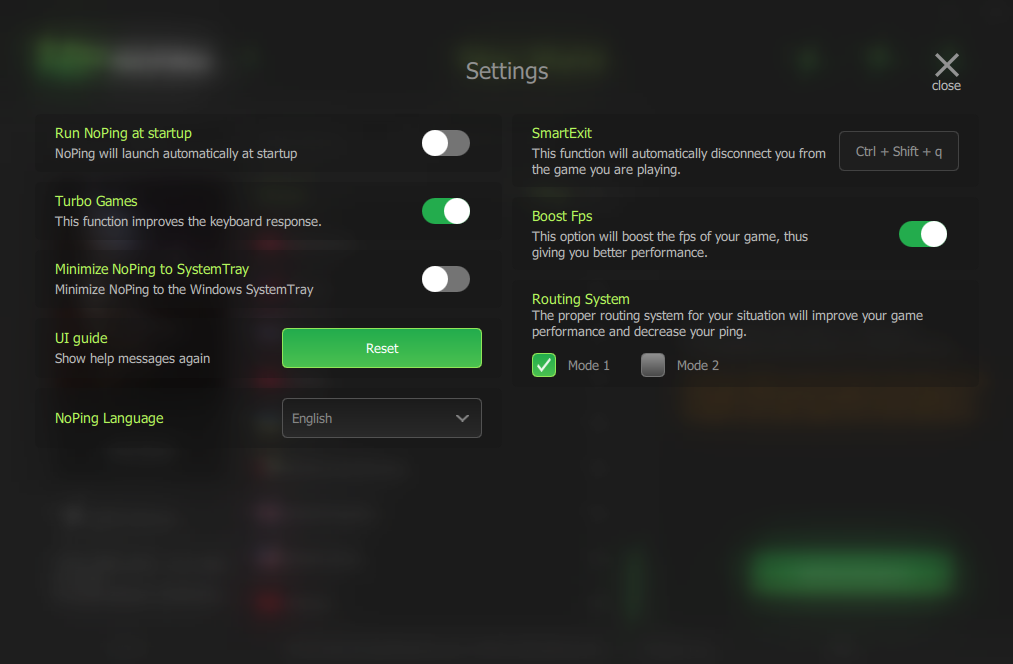 There you go, you are now ready to experience the world of Aeternum with the best ping on the market! Open the game again and notice the improvement after the changes, good gaming, and see you next time!

The classic action RPG Diablo II will get a new remastered version this Thursday (23). Diablo II: Resurrected promises to be faithful to the game of the 2000s, so the evil will be resurrected and the essence of the game will remain.

The RPG tells the plot of a Diablo seeking revenge, chaos, and destruction. The story begins when a hero ends up being possessed by evil despite having defeated him, this hero becomes a dark walker that we can call the Dark Wanderer, from there the walker starts to spread darkness and destruction everywhere. A fight is waged and the more the hero moves away, the angrier Diablo gets, with this, demons emerge to fight a battle and as in every story, good always wins over evil, what we don’t know is for how long. It is up to the new hero of humanity (player) to face the darkness and stop the Dark Wanderer’s plans from succeeding.

The remaster comes as a gift to the fans in view that all the gameplay, maps, audio and details that made Diablo II a success will remain and touches of current game technology will be added to complement the game.

Developed by Blizzard, the RPG will be available for PlayStation 4, PlayStation 5, Xbox One, Xbox Series, Nintendo Switch, and PC. In addition, players will be able to enjoy this new experience in solo or cooperative mode with up to 8 players.

With the Diablo 2 update, you need to equip yourself to face this new challenge! In this optimized version, the servers will be hosted outside of Brazil and NoPing helps to improve your ping and also your fps! Don’t let lag or low fps get in the way of your battle against the demons, use NoPing and enjoy 100% of the game.

Inspired by Chinese mythology, Naraka Bladepoint officially arrives on Steam on August 11th (Wednesday). The Battle Royale developed by 24 Entertainment already had the success it is gaining based on its latest beta test, at the time the game had more than 1 million simultaneous players and competed in the top 5 of the most played on the Steam platform.

Naraka Bladepoint was developed with scenarios and characters 100% designed in Chinese culture, the purpose of the game is to be the last survivor on the island of Morus with 60 players. The confrontation and the quest for victory take us back to popular games like Free Fire and Fortnite, in addition, Naraka has elements of movie that covers an even larger audience.

The great difference of the game is in the combat modes and the weapons used, as the great news of the official version, the fire chainsaw and the dagger that complete the new style of the heroine Yoto Hime. Another point to be highlighted in the gameplay are the characters’ hooks and parkour, they all have both abilities and can be used on anyone and anywhere.

When analyzing the feedback from internet users, there is a high rate of complaints in relation to servers in Naraka, with the highest peak being Brazilian and Australian. So, at this moment, the game stands out positively for its graphics and innovation, but it lacks connectivity.

With the removal of the SA server that was available in the beta version, some players including Brazilians had to migrate to NA and face a sloshed game with ping ranging from 140 – 190 ms, resulting in a refund request. To date, the values ​​for purchasing the game range from R$80.00 to R$210.00 on Steam. 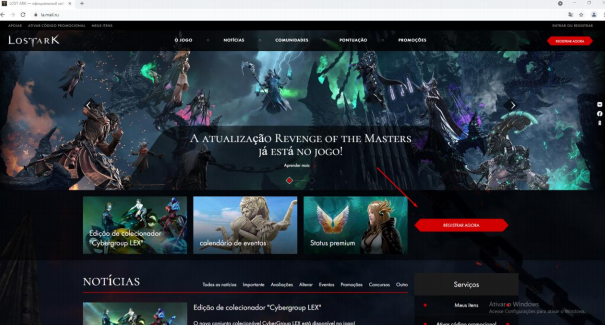 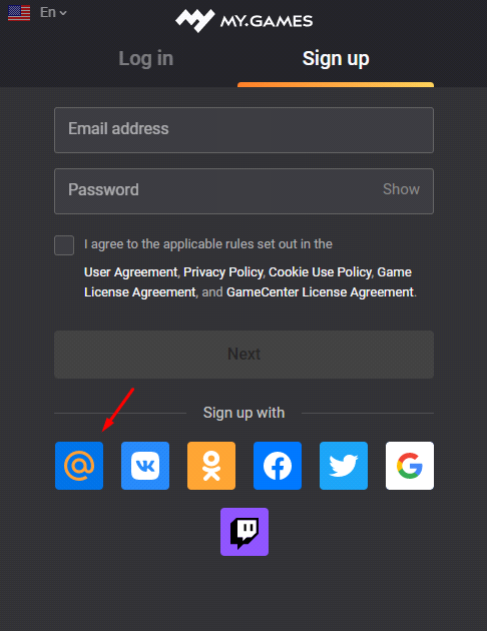 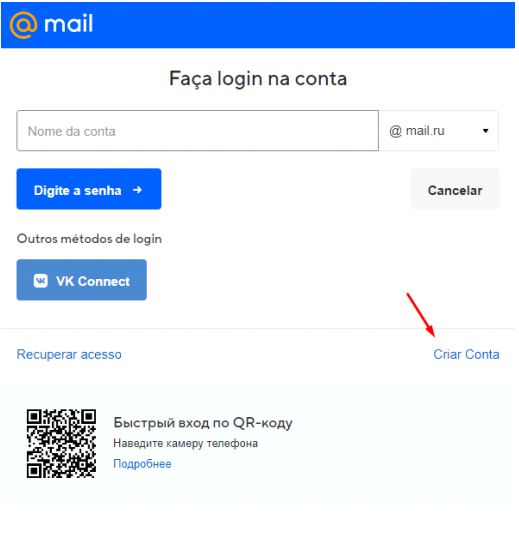 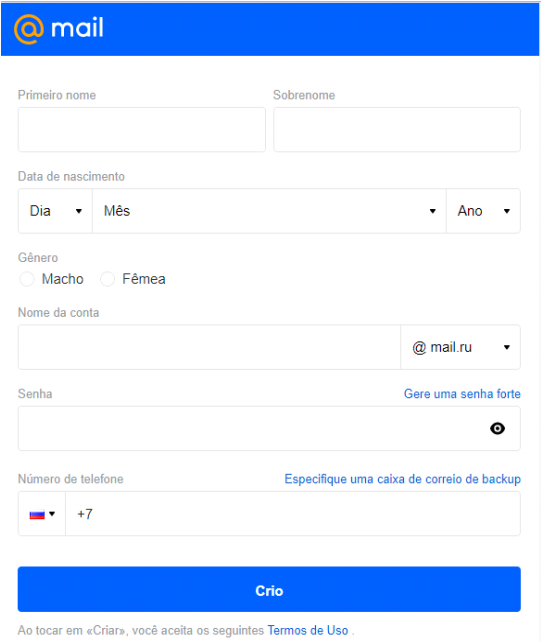 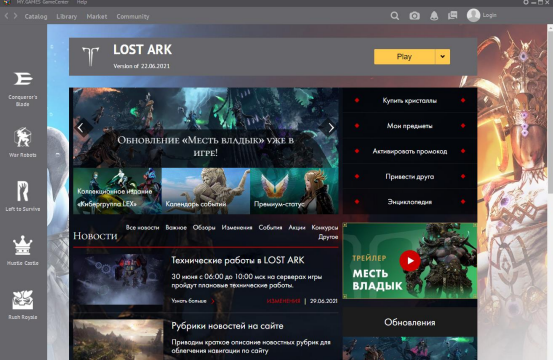 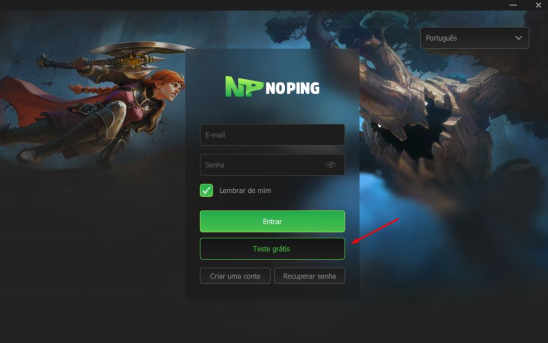 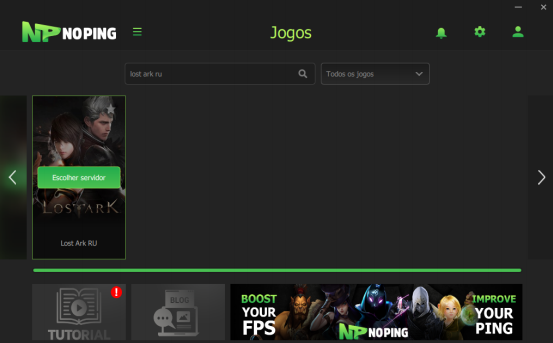 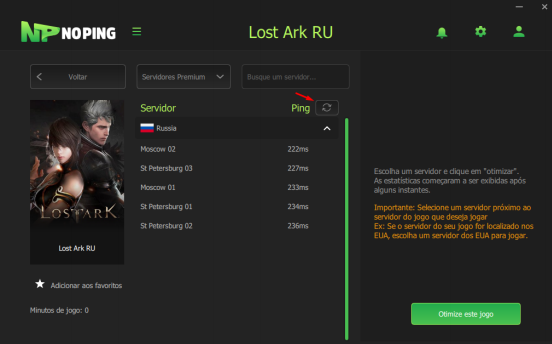 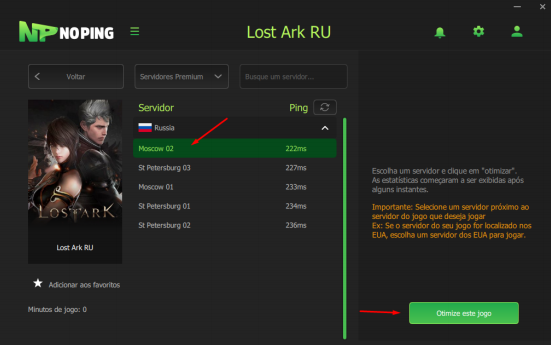 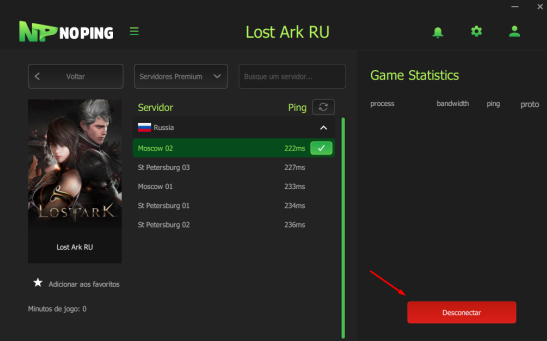 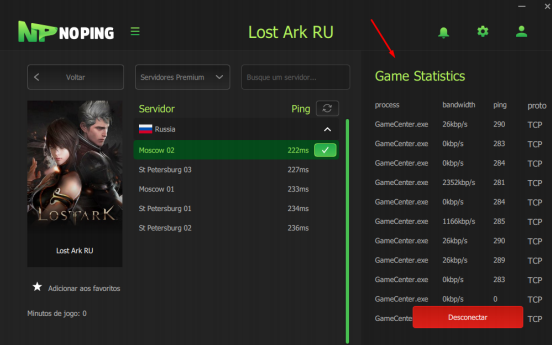 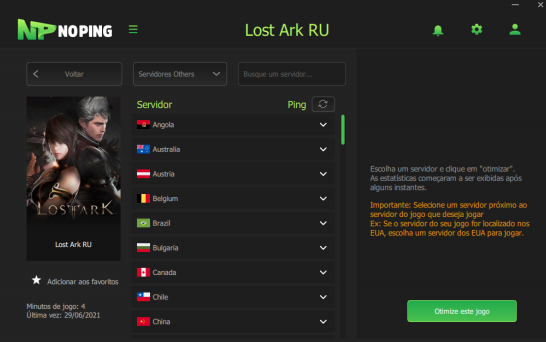 Kakao Games confirmed the start date  of the Closed Beta of one of the most anticipated MMOs of the year, NEW GENESIS. Phantasy Star Online 2 New Genesis is the new edition of the classic MMO, with updated engine, graphics – a new MMO. 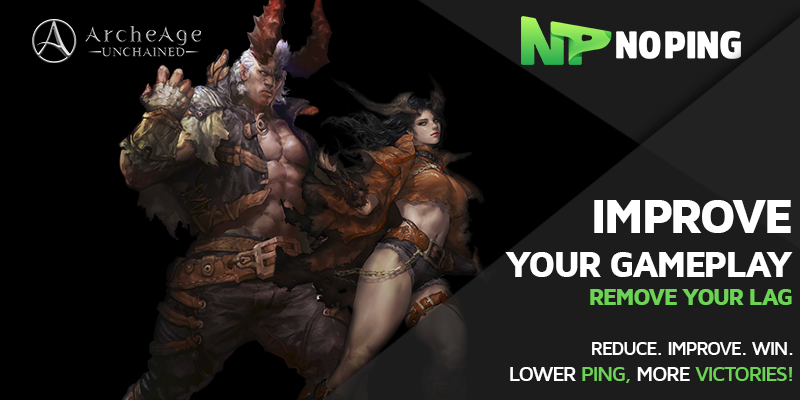 The week started with lots of news for all Final Fantasy XIV fans! Today, tuesday, Square Enix relased Patch 5.5 Death Unto Dawn, the last major content patch before the next expansion. Death Unto Down will continue the main story, a new Dungeon and the last part of the Nier Automata Raid and much more!

Enjoy FF XIV for free and with the lowest ms using NOPING!

This week we had the newest Black Desert class: SAGE. SAGE uses time to manipulate his abilities and destroy his enemies. Combine SAGE’s time manipulation skills with NOPING’s latency reduction and be invincible in combat!

Try Free for 7 Days and check our plans

Great news for DOTA players and this time it is not on the virtual world. This week, the animated series DRAGON’S BLOOD, inspired by the world of DOTA, was launched. The series shows the famous DOTA heroes defending the world from various threats. The series is available on Netflix